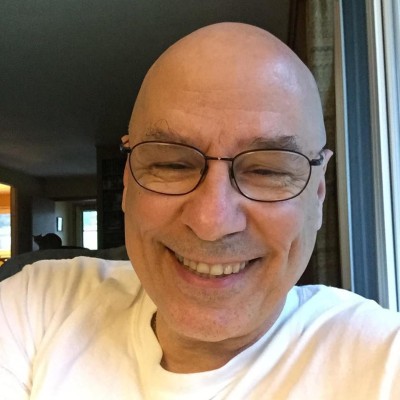 JaiRamOm was born in New Orleans Louisiana to Catholic parents Rosary and Stephen Hartel in 1952. His Christian name is Joseph Hartel.
In the fall of 1981 he enrolled in the second cycle of graduate study in philosophy at the Pontificial Gregorian University in Rome, Italy, earning a Licentiate in Philosophy (Ph.L.) in 1983 and a Doctorate in Philosophy (Ph.D) in 1992.
Dr. Hartel attended a Ram Dass retreat at the Christine Center in Willard Wisconsin. This retreat completely changed his life. In 2007 with Ram Dass'support, Dr. Hartel traveled to India and met with KK Shah and Siddhi Ma, two longtime devoted of Maharajji Neem Karoli Baba. In the spring of 2007, Dr. Hartel recieved from Siddhi Ma the name JaiRam on Hanuman's birthday. JaiRam is a certified yoga teacher with 500 hours at Satchidananda Ashram, 200 hours with Sri Dharma Mittra in New York City, and 200 hours with Srivasta Ramaswami in Los Angeles. JaiRam received the last name Om from Sri Dharma Mittra in New York City. JaiRamOm is a 500 Hour, registered yoga teacher with Yoga Alliance.

View all Yoga Instructors in Dubuque