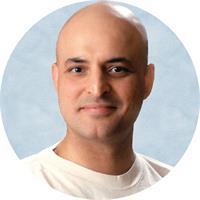 Aadil was conceived because of yoga. His devout Parsee (Zoroastrian) parents had been unsuccessful in their attempts to have children for seven years, and so they began studying yoga with B.K.S. Iyengar. Iyengar told them that if they were faithful in their practice, they would soon conceive a child. A year later, Aadil was born in Bombay.

He began studying asana with Iyengar at the age of seven and shortly after was introduced to the Purna Yoga of Sri Aurobindo. When Aadil was twenty, Iyengar encouraged him to embark on his first teaching tour of Europe and North America. Two years later, he awarded Aadil the Advanced Yoga Teacher’s Certificate.

For nearly thirty years, Aadil has been regarded as a “teacher of teachers,” and many of the world’s top yoga instructors have studied with him. He has a unique teaching style, mixing melodious instructions with recitations of poetry, philosophical insights, and in-the-moment humor.

Aadil and his wife, Savitri, are the founders of Purna Yoga, a holistic synthesis of yogic traditions based on the work of Sri Aurobindo and The Mother. Aadil and Savitri also founded Alive and Shine Center in Bellevue, Washington, and The College of Purna Yoga, a 200-hr, 500-hr, 2,000-hr, and 4,000 hr Certificate-Level teacher training program licensed by the State of Washington and Yoga Alliance Certified. Aadil teaches classes, teacher trainings, and workshops at Alive and Shine Center and throughout the United States, Canada, Mexico, Europe, India, and other parts of Asia.
An encyclopedic knowledge of health matters informs Aadil’s teaching. He is a certified shiatsu and Swedish bodywork therapist, a clinical hypnotherapist, and an Ayurvedic health practitioner recognized by the American Ayurvedic Association.

Aadil is the author of Fire of Love: For Students of Life and Teachers of Yoga. He has also written three manuals used in his beginning, intermediate, and therapeutic teacher trainings. He is currently working on Passion for Yoga: Purna Yoga, Level One, a practice guide for beginning yoga students. Aadil has written extensively for Yoga Journal, having been the Asana Columnist in 2003 and author of the Teacher’s Column for the website, as well as the “Asana Expert” for both the magazine and the website. He is frequently a keynote speaker at national events.

Starting with a bachelor’s degree in physics and math, Aadil eventually got a degree in law. He practiced law in Washington State until resigning to devote his energies to his true life purpose: exploring and sharing Purna Yoga. He has a passion for the arts, especially poetry, and has intensively studied elocution, operatic singing, Japanese flower arranging, painting, and drawing. He continues to be a student in the healing arts. Aadil lives with Savitri and their daughter Zenia, in Bellevue, Washington.

View all Yoga Instructors in Bellevue